Imagine walking along the sweeping cliffs of Cornwall with the windswept beach below as the waves of the Atlantic crash against the shoreline……all right, all right, maybe we’ve been watching Netflix too much these days.  Still, that’s pretty much how Tony Fraser, Cornish Sea Salt Company’s founder, came upon the idea of reviving a sleeping, century old industry. It started with a walk along the beach in the Cornish peninsula known as The Lizard, the discovery of an old Iron Age salt works, and a notion that became a passion to re-imagine the sea salt industry for the 21st century.

Hand-harvested from the purest Atlantic waters, just 26 feet from the British shoreline, Cornish Sea Salt is a high-quality, mineral-rich salt. The rare geology beneath the sea surrounding The Lizard gives this salt a complexity and intensity of flavor that is naturally lower in sodium content. In fact, this salt retains so much of the good stuff from the sea that you can use 30% less of the salt when seasoning to get the same impact. The flakes are beautiful microscopic pyramids that are delicate, soft and melting on the palate. Allowing tastes to build and evolve, they are a perfect finishing salt, dissolving quickly to give an initial hit of sea-saltiness. Versatile still, Cornish Sea Salt Flakes can be used for bakery, butchery, in mixology, or marinades.

Cornish Sea Salt is one of the very few sea salt industries harvesting from open waters, more specifically the protected waters of the Atlantic lapping at the shores of The Lizard, a designated Area of Outstanding Natural Beauty.

Compare it to Maldon and see which salt you like better. 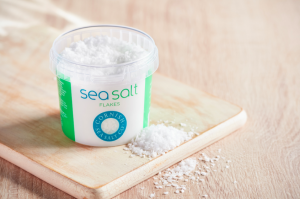 Ask us about it

Coro Artisan Meats While shopping ingredients to create charcuterie boards, the creators of Coro discovered that the salami market melded into a sea of sameness.  Though classics, it seemed flavor choices were limited to the same old profiles over again. Where was the...
Read More

We hear, “pasta is just pasta”…..but we know, and now you do too, that Mancini is not “just pasta”. It is an edible work of art. Taste the deliciousness for yourself.

Mozzarella di Bufula is a bit of an anomaly – somehow the richest milk (water buffalo milk has twice the fat of cow milk!) is transformed into a feather light pillow of cheese.