Set against the foothills of the Pyrenees Mountains and the craggy coast of the jewel-toned Mediterranean Ocean, sits the beautiful Languedoc town of Banyuls Sur Mer. As one of the southern most cities of a province that shares its border with Spain; Banyuls Sur Mer belongs to French Catalan country.  For centuries Banyuls Sur Mer was known as a linchpin of criminal activity – a place where the illegal trade of smuggled goods between France and Spain was able to flourish.   Today Banyuls Sur Mer is no longer known for its criminal past.  Rather, most people associate the town with the sweet fortified wine of the same name.

Banyuls Sur Mer can trace its winemaking origin to the Ancient Greeks, who planted grape vines in the shadow of the temple they built as a tribute to Venus.  The first organized vineyard was planted in 1074, and much more recently, Banyuls Vin Doux became protected by the French AOC.  Banyuls Vin Doux must contain at least 50%, and up to 75% Grenache grapes.  Other grape varietals used are Carignan, Cinsault, and Syrah.  The climate in the Languedocis arid, and the grapes “suffer” under the nearly three-hundred days per year of hot Mediterranean sunshine.  Banyuls wine is produced using a French method called “mutage” which is similar to the method used tomakePort.  Alcohol is added to the wine during the fermentation process in order to halt the yeast consumption while the sugar levels in the wine are still high.  After the initial fermentation, the wine spends one year maturing in 60 liter oak barrels kept in cool stone cellars.  After a year has passed, the wine is moved into larger stainless steel drums that are kept outside so that their flavor can be enhanced by the outside elements of humidity and temperature.  The AOC stipulates that Banyuls wine must be aged for a minimum of thirty months.  The alcohol content of a finished Banyuls Vin Doux is between 16 and 20%, the flavors are typically sweet and spicy with vanilla undertones. 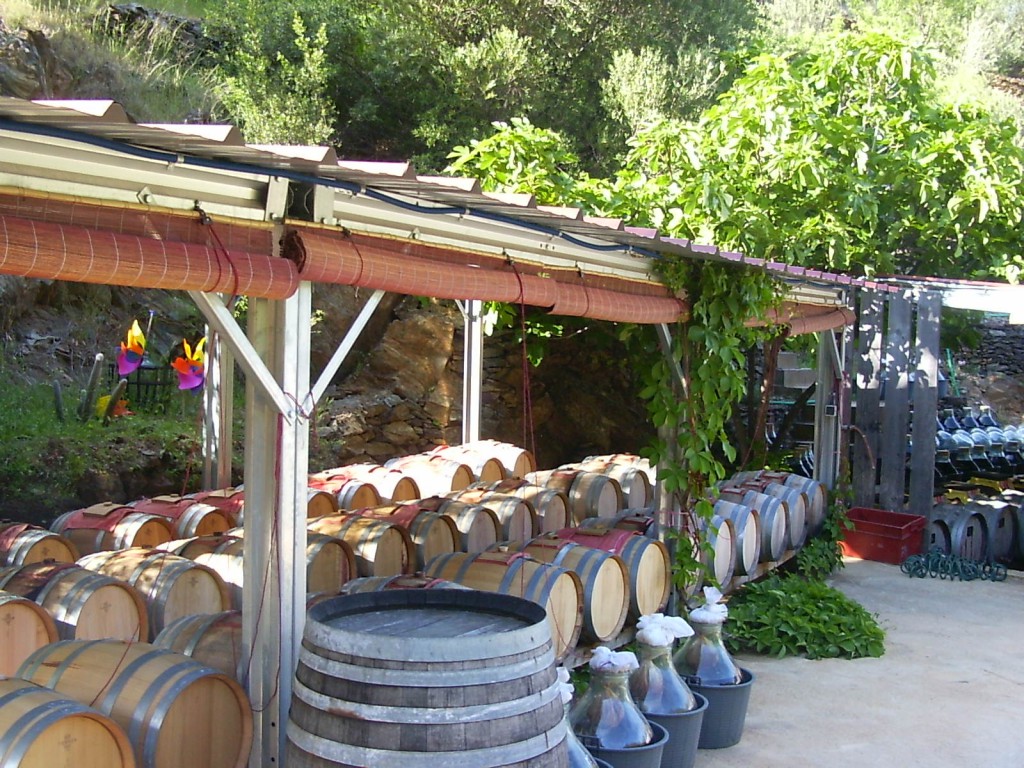 As much as we love wine at Great Ciao, we only sell its acetified product.  And the AOC protected Vinaigre de Banyuls is truly a knockout.  Only once the wine is ready, can the vinegar productions begin. The vinegar is acetified in oak barrels.  The process of acetification takes between 4 to 6 months to run its course (as opposed in the week long process used to make industrial vinegars).  Once the alcohol has been completely transformed into acetic acid, the Vinegar is bottled, and sent to the Great Ciao warehouse, in Minneapolis.  The Languedoc only produces around 10,000 bottles of their Banyuls Vinegar every year.  So while its not likely to become the household name that Balsamic and Sherry vinegar have become, its still worth having at least a few bottles of the stuff on your store’s shelves, or in your kitchen’s pantry.

After a lot of searching, the Banyuls vinegar we have settled on is hand-made by Nathalie Lefort.  She produces Vinaigre de Banyuls at her tiny vinegar factory “La Guinelle”.  The vinegar she produces has less than 6.5% acidity, and is available in both retail and food service sizes.  We think it tastes like red berries, honey, perhaps even a little bit of gingerbread spice, and warm vanilla.  It tastes delicious in a vinaigrette, or used to deglaze a pan after searing any sort of wild-game fowl, or fresh sardines!  At the Great Ciao warehouse, we enjoy sipping it straight from a spoon.