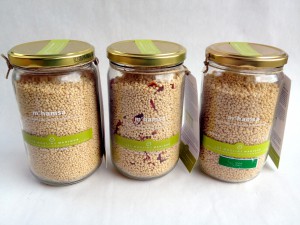 We’ve been seriously smitten with m’hamsa couscous from the Mahjoub family for a few years now, so we are happy to see them getting much deserved attention from the powers that be at the SOFI awards.

Les Moulins Mahjoub is a family owned cooperative of twelve brothers and sisters, with each overseeing an aspect of the production.  Between the twelve of them, they own several organic farms in different environmentally diverse regions of Tunisia – from the deserts of Tatouine (its a real place), to Mediterranean Tunis, and the lush Mejerda Valley – which served as major grain growing region for the Roman Empire. It is in theMejerdaValleythat the Mahjoubs grow the wheat used to make their m’hamsa couscous.  The only ingredients are durum wheat (semolina), extra virgin olive oil, salt and water.  Again setting themselves apart from the competition – the Mahjoubs use their own extra-virgin olive oil in everything they make from the sundried tomatoes, to the couscous.

“M’hamsa” is a style of couscous that has become increasingly hard to find – even in Tunisia, where industrial couscous have long replaced the ones that are painstakingly rolled by hand, a process that takes twelve days start to finish.  Semolina flour is sprinkled with water, and rolled by hand in a shallow ball, until small bits of grain clump together.  Once enough balls have formed, the remaining flour is sifted out, and the process repeats itself.  The couscous are sundried over the course over the next few days, then rolled in olive oil, sprinkled with a bit of salt, and left to cure in the sun.

These are couscous with terroir.  When you stick your nose in the jar, you’ll smell the toasty aroma of the couscous baking in the Mediterranean sun and the smokiness of the nearby outdoor ovens.  Inspect a few in your hand, they are beautiful little irregular pebbles of semolina.  A far cry from Israeli Couscous, which are perfectly spherical and don’t taste like much.

These delicious couscous are available in both retail and foodservice sizes.  Once you taste them, you might be convinced to pick up a nine kilo tin for your home use as well.  They taste supurb combined with any of the other tasty sundries made by Les Moulin Mahjoub.  The Mahjoubs also bottle their own tomato couscous sauces, for a dish that bears striking similarities to Italian cuisine – until you realize thatTunisis only a few miles away fromSicily.  We like them in a chilled couscous salad dressed with olive oil, a bit of their traditional harissa, chopped cucumbers, sundried olives, marcona almonds, and our Stickney Hill chevre.