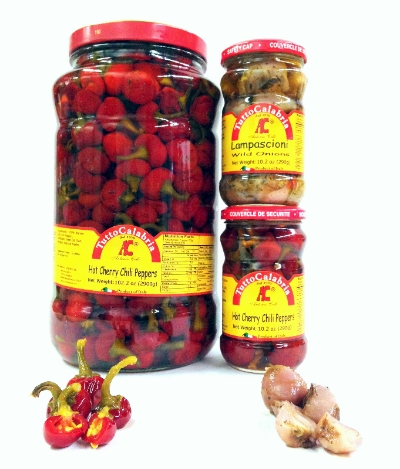 As the southernmost region of mainland Italy, Calabria forms the tip of the “boot.”  A narrow strip of water separates Calabria from the island of Sicily.  The close proximity has allowed centuries of invading cultures to shape the food and agriculture of both regions.  The methods of preserving food with salt and oil harken back to Roman antiquity; Saracen invaders brought artichokes and bergamot oranges and the Spanish conquistadors forever changed Italian cuisine by introducing tomatoes and chili peppers from the new world.

Today, the agricultural production of Calabria boasts a rich tapestry of tomatoes, eggplant, melons, peppers, artichokes, figs, Tropean red onions and bergamot oranges.  The food is elegant in its simplicity, and is based on a foundation of great ingredients grown and preserved at home.  Calabrian cuisine has a reputation for heat, and if it’s not spicy enough, every table has a jar of oil-packed pepperoncini to add as you see fit.  If you’ve never tried Calabrian chili peppers, you are in for a treat. These small round peppers are little cherry bombs of flavor; all at once salty, fruity, smoky, and spicy with a nice meaty texture.

Our Calabrian Peppers come by way of Tutto Calabria, a small company founded in 1970 by Antonio Celli.  Today the company is run by Antonio’s children: Giampaolo, Fiorella and Irene Celli, who are equally committed to sharing traditional Calabrian foods with the rest of the world.

We love to eat them straight out of the jar; the seeds add a nice crunch.  But they are also delicious stuffed with good oil-packed tuna or anchovies as antipasti.  They add a delightful piquancy to a traditional Arrabbiata sauce, and also serve as a great pantry staple for a weeknight meal of bucatini tossed with diced pepperoncini, anchovies, toasted breadcrumbs and olive oil.

We also have Tropean Lampascioni: sweet red onions, grilled, pickled and packed in olive oil.  The red onions from the resort town of Tropea are celebrated with an annual festival where they are used to flavor everything from foccacia to gelato.  As with the peppers, we like them best straight out of the jar.