Which would you prefer… 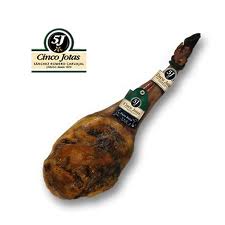 We had to wait until 2008 to get the famous black hams imported into the United States.  The only producer certified at that time was Fermin, and they make a great product as many of you can attest.  We now have the opportunity to import another producer from Spain, Sánchez Romero Carvajal of Cinco Jotas.  Fermin and Cinco Jotas come from the two largest producing regions of Iberico hams in Spain, Fermin is in Salamca and Cinco Jotas is in Jabugo.  The ibérico hams from both, La Alberca in the Salamanca province and Jabugo in the Huelva province are known for their consistently high quality and both have their own Denominacion de origin.

Jabugo has the reputation as the ham capital of Spain.  It is the place that songs are written about and the place that movies reference when they are talking about the Spanish hams.  “Jamón de Jabugo” is ham that has been produced and prepared in Jabugo (Huelva, Spain), a village that belongs to the Jamón de Huelva Designation of Origin and has a total of 6 producers registered with the Producers’ Association.  Jabugo is in the heart of the Sierra de Aracena, at a height of about 700 metres above sea-level.  The cold and dry in winter, mild in spring and summer, make it a perfect place to cure hams.

Salamanca is the location of the central offices of the Guijuelo Designation of Origin.  The Guijuelo region was a pioneer in the ham business, initiating the process for exporting hams over 20 years ago.  The DOP of Guijuelo insures that the iberian pigs come from Spain: Salamanca, Extremadura, Cordova, Huelva, Seville and Castile La Mancha, but the hams are cured and aged only in the Guijuelo area.  Salamanca is situated on the Iberian plain over 1,000 metres above sea level. It is bordered on the east by the Tormes River, on the west by Mt. Tonda and on the south by two mountain ranges: Sierra de Béjar and Sierra de Gredos. The microclimate is characterized by cold dry winters, and short mild summers; which is ideal for drying and aging hams.

So for you, our customers, we have some questions.  First, where would you rather live if you were a pig: Jabugo, just north of Sevilla in the Parque Natural Sierra de Aracena y Picos de Aroche or Salamanca, just west of Madrid in the Las Batuecas Natural Park? And the final question, would you like to try the Cinco Jotas?

Give us a call if you want more information about the product as we continue to work with the producer to bring the in some samples.